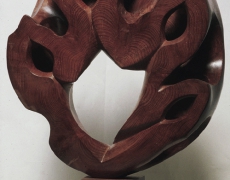 “The material itself was the beginning of this idea and was the result of having to saw off the bottom of a large trunk of yew that had begun to rot up the centre. The leaf profile is simply an emphatic development of the natural contour of the log. Four linked chambers, open only at the front, almost surround the central piercing. The edges are worked to distract the eye as much as possible from the thinness of the original slice of wood.” Hugo Powell